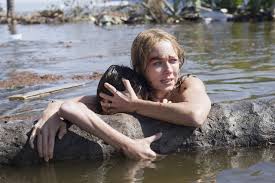 The Impossible is based on a true story of a family of tourists effected by the 2004 Indian Ocean Tsunami. Maria and Henry Bennett (Naomi Watts and Ewan McGregor) are vacationing in Thailand with their three sons, Lucas, Thomas, and Simon (Tom Holland, Samuel Joslin and Oaklee Pendergast) They're poolside at their resort when the tsunami hits with no warning. Henry grabs hold of Thomas and Simon, but Lucas and Maria are too far away. They find each other washing away in the waves. Maria is gravely injured, with the help of strangers, she and Lucas eventually make their way to a local hospital. We know by the trailer that this family is eventually reunited, but this film is to show us their ordeal, and the good in the people that helped them.
Performance wise, Naomi Watts blew me away. I was rooting for Jennifer Lawrence all during Oscar season because I loved Silver Linings Playbook so much, but after finally catching The Impossible, I daresay that Naomi's performance was stronger, more devastating, and easily more vulnerable. Perhaps she should've been the one with that golden statue? Ewan McGregor was fantastic as well, especially during a scene where he's speaking with a family member on the phone. The children were wonderful as well, particularly Holland, who we spend the most time with.
I think this movie gets an unfair amount of hate. Some hate that the actors weren't Spanish, like the real family. Some hate that they were "flown away on a private jet" at the end of the movie, despite it obviously being a medical plane to another hospital and your basic travel insurance would get you that. Some hate that this one family was singled out when so many other families did not have such a lucky outcome. Well you know what? None of that is the point. The point is that even in the event of a disaster like this, there's still hope. People, even complete strangers will come together and help each other because that is what humans should be doing. Telling this one story doesn't take away from the horrors thousands of have suffered, but this one story gives us hope. It's like some people are offended by a happy ending.
If I had to be critical of one thing about this movie, it would be that the score is completely melodramatic at times. That's my one complaint.
Recommended: Yes
Grade: A-
Memorable Quote: "I saw Daniel again..he was so happy." - Lucas (Tom Holland)﻿