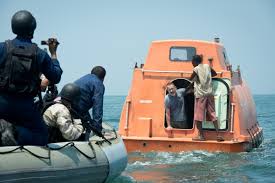 Rich Phillips (Tom Hanks) is the captain of a cargo ship sailing not too far off the cost of Somalia. It becomes hijacked by Somali pirates, led by Muse. (Barkhard Abdi) For awhile, the crew out smarts them, but just as they're letting them leave in a life boat, Muse takes Captain Phillips as a hostage, leading to a stand off for days between the pirates and the U.S Navy as they try to head back to the Somali coast.

I don't remember much from this story, so I was legitimately worried for Phillips until the credits started rolling. Director Paul Greengrass knows how to build tension, and the 2nd half of this movie is so intense that I was constantly squirming in my seat.

Tom Hanks, wow. That's all I can say. His performance, particularly the in the film's final moments is outstanding. Abdi, Barkhard Abdiraham, Faysal Ahmed, and Mahat M. Ali were all very convincing as the pirates. Though I think the film's attempt at humanizing what they did at the beginning felt a little forced. Still, I'm glad they included that scene. The first half of the film dragged a little, and the dialogue from the other crew members of the ship was borderline laughable at times, but the 2nd and 3rd act save it. I had zero expectations going in, but after so many recommendations on Twitter, I'm glad I went to see this.

On the side: There's a scene in the lifeboat where they hear a load honking noise, and they open the door to see the U.S Navy ship, right after the honking some guy behind me went "Who's there? America, mother fuckers!" I laughed. That was the only time in the entire film that I did.