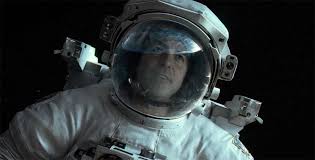 I kept telling myself the entire time I was watching Gravity, "thank God I'm not an astronaut." Free floating in space and hanging off the side of a satellite looks fucking terrifying.
Astronaut Matt (George Clooney) and medical engineer Ryan (Sandra Bullock) are in space on a mission. They're fixing part of a telescope on Hubble when they get word that debris from nearby satellite, shot down by the Russians will be coming their way. When it does, they're hit. Ryan is knocked away from the others and finds herself spinning further and further away.
I daresay that Gravity might be the most visually stunning movie I've ever seen. I complain about 3D quite often, I don't need shit jumping out at me, but as much as I hate to admit it, it DID contribute to how marvelous everything looked during this film. I can hardly describe the way it was filmed, It almost felt a little too real. I suddenly got nervous about heights, or gasped when things would crash on screen. It really is a surreal experience. Even the reflections of certain things off of the character's helmets were breathtaking.
Honestly, Gravity is damn near perfect for what it's trying to accomplish. My biggest gripe was that it was Sandra Bullock we had to watch most of the time, and not George Clooney. I had hoped it would've been the other way around. That's seriously the only downfall. I don't care much for her as an actress, and she's definitely not bad in this film, I would've rather had hers and Clooney's roles switched around. But that's a personal opinion, and I won't stop me from experiencing this film again. (Because that was what this film really was. Not a viewing, but an experience.)
Recommended: Yes
Grade: A-
Memorable Quote: "I hate space." - Ryan (Sandra Bullock)﻿