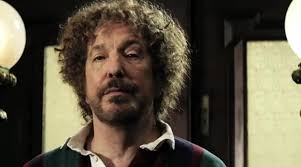 CBGB follows a man named Hilly Kristal, (Alan Rickman) a divorcee who's just filed for bankruptcy for the 2nd time. He's hell bent on opening a club. He tries for the 3rd time, purchasing a beat up bar in a shady neighborhood. He names it CBGB (country, blue grass, blues) but that's not the kind of music he featuring. CBGB became the underground place to be for punk music. He gave plenty of bands a chance, and asked that they play original music. Plenty of them went on to be big names. The Ramones, Blondie, Television, Patti Smith, Iggy Pop. Despite the success, Hilly still isn't great about paying his bills, that falls on his daughter Lisa (Ashley Greene, who's face now screams "I've done too much coke!") to keep track of the bills. He also nearly blows everything by trying to manage The Dead Boys. (Justin Bartha, Rupert Grint, and Bronson Adams)
Despite not knowing a whole lot about the actual CBGB, I really enjoyed this film. I think Alan Rickman gave one of the best performances I've seen all year. The film's soundtrack was wonderful. (a lot of these bands lent them their music for free) I also really enjoyed the cast. Bartha and Grint were insane, and Malin Ackerman, Freddy Rodriguez, Johnny Galecki, Kyle Gellner, and Ahna O'Reilly all show up for bit parts as well.
While I enjoyed the film, I can see why the editing would throw people off. Scenes cut away into pages of a comic book, (a side story is the birth of Punk magazine) complete with word bubbles and some animation. I thought it worked well with the tone of the film, but I could tell some other people in the theater were visibly annoyed with it.
Recommended: Yes
Grade: B