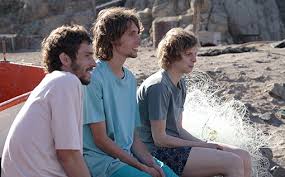 Apparently the title of this film got longer after it was released on DVD? Anyways..
Michael Cera's 2nd feature with director Sesbastian Silva is certainly interesting. (Their other is the far better Magic Magic) The IMDb trivia says they filmed this while waiting for Magic Magic to get financed. I can tell.
Jaime (Michael Cera) is an American student traveling through Chile. While on the hunt for some drugs with his buddies, he runs into the enigmatic Crystal Fairy. (Gaby Hoffmann) They don't exactly hit it off. But after eating some "magical cactus" they go on a journey that changes Jaime's tune all together.
This movie was fucking weird. That's the best way to describe it. It had no structure. There's movies like Uncertainty where 90% of the film is adlibbed and the actors do wonders with it, this film was apparently shot the same way, only it doesn't benefit from it. Parts are certainly amusing, and Gaby Hoffmann actually gives a great performance. (Though her character's excessive nudity was a little much. I thought it fit at the beginning, but then it got old.) It's nice to see Cera play kind of a prick after seeing how awesomely prickish he was in This Is The End.
Recommended: No
Grade: C
Memorable Quote: "She's embarrassing herself.." - Jaime (Michael Cera)