Review: Out of the Furnace 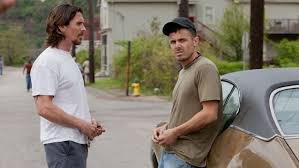 When we meet Russell (Christian Bale) he's just an everyday factory working trying to make end's meet. He's in love with his girlfriend Lena (Zoe Saldana) and he's trying to keep his brother, Rodney (Casey Affleck) out of trouble before he is sent back on another tour in Iraq. One night, Russell has a few drinks, and after bailing Rodney out of trouble with John Petty (Willem Defoe) he gets behind the wheel and gets in a car accident resulting in the death of the driver and a young child. Once he's out of prison, Lena has moved on with a police officer named Wesley (Forest Whitaker, who despite looking like a teddy bear is someone I would NEVER want to piss off) and Rodney is still having money troubles. He agrees to fight for a ruthless man named Harlan (Woody Harrelson) and when he doesn't return, Russell will do whatever it takes to find him.
Out of the Furnace really is all about the performances. Harrelson establishes early on that his character is a colossal ass hat. Bale's carries the weight of the world on his shoulders and tries to put his head down and accept the terrible things that resulted from his car accident. Affleck's character is like a ticking time bomb. Saldana, Whitaker and Defoe don't get a whole lot to do, but it was nice to see their faces in these somewhat thankless roles)
The score is haunting and one of my favorite things besides the acting, but this film is rather dull and slow moving. It's very grey and moody. I do applaud it for being different, but I just feel that when you have performances this strong, the story should back them up, because this could've been great.
Recommended: Yes
Grade: C+
Memorable Quote: "Since we're standing so close, why don't we try that now?" - Rodney (Casey Affleck)
﻿