Review: The Wolf of Wall Street 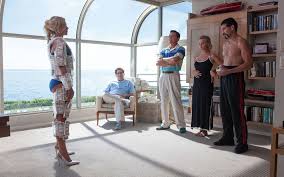 Don't let this film's hefty 3 hour run time scare you away. If anyone can make a 3 hour comedy work, it's writer Terance Winter and director Martin Scorsese. Yes, you read that right.
Jordan Belfort (Leonardo DiCaprio) is an ambitious young stock broker who after making decent money with a firm that abruptly closes, decides to turn his attention to penny stocks instead. You see, he gets 50% commission off of those, and soon he's assembled some of his friends, Donnie, (Jonah Hill) Nicky, (P.J Byrne) Robbie, (Bryan Sacca) and Alden (Henry Zebrowski) and teaches them his sales approach. Soon, they've turned a shady operation from an auto garage into a massive multi-million dollar company that loves spending its money on hookers and drugs. And no, none of this is very legal. Soon Jordan finds himself under the eyes of FBI agent Denham. (Kyle Chandler, the film's sole weak link.)
When you think of Scorsese, and even Winter for that matter, you don't normally think of comedy. I think John LaRue over at The Droid Your Looking For but it best: "It’s as if Scorsese saw a few Judd Apatow movies and said, “That’s all you’ve got? Watch this” and then dropped an epic 3-hour Judd Apatow movie on everyone." The film is outrageous and contains probably one of the best performances Leonardo DiCaprio has ever given, and that says a lot. This role feels like it's out of his comfort zone so to speak, but he nails it. The entire cast, minus the terribly bland Kyle Chandler are amazing. (tip: I got over Chandler's boring-ness by just pretending he was Ron Livingston from Boardwalk Empire season 4.)
You could argue that the film is a little misogynistic, there's tits and hookers galore, but I thought it worked in a way. To me, it's not hard to believe that people with this much money (and drugs) could act in such a way. I appreciated the final 1/3 of the film too. That's where it takes it's dramatic turn, and it's welcomed because up until then, I was actually kind of enjoying Jordan's antics and almost forgot that this guy really is a total sleazebag.
Needless to say, there was a point in The Wolf of Wall Street where I laughed so hard I nearly had tears in my eyes. This film quickly because one of the best I've seen all year.
Recommended: Yes
Grade: A+
Memorable Quote: "Stand aside, hunnie!" - Jordan (Leonard DiCaprio)