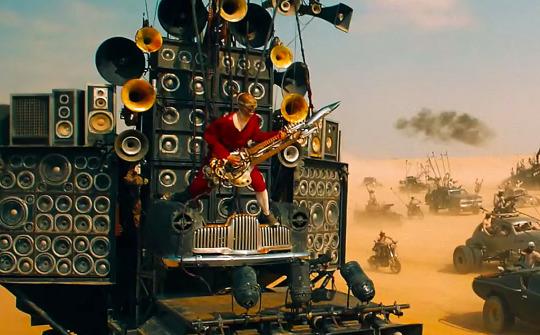 I finally gave in and watched this. I saw the previews and immediately wrote it off as something that probably wouldn't interest me. My husband actually went to see it without me. He loved it. The bloggersphere loved it. So I knew I had to give it a shot.

Max (Tom Hardy) is a drifter who is captured and turned into a "blood bag" for a War Boy named Nux. (Nicholas Hoult) At the same time, Furiosa (Charlize Theron) decides to run away from the ruler of the Citadel, Immortan Joe (Hugh Keays-Byrne) with a group of women he uses as his "breeders." They have a long road ahead of them, and Joe and his people are hot on their tail. Max get's pulled in because well...he's a blood bag.

For a film that's essentially an extended car chase scene, it really works. I wish I could've been in the writer's head when he thought "OMG I'm going to have this guy whose only purpose is to play the guitar and sometimes fire will shot out of it." It's just over the top and fun. It's easily one of the best action movies I've seen in awhile. (right up there with Kingsman: Secret Service) But the best part of the film is the women. Furiosa is a strong leader and the group of women she saves grow into that position of well. It's just nice for a film to have all these badass girls together.

The ending made me a little sad, though they set it up for possible sequels. Highlight for spoiler *I just wanted Furiosa and Max to stay and be BFF's. I didn't want Max to leave.*