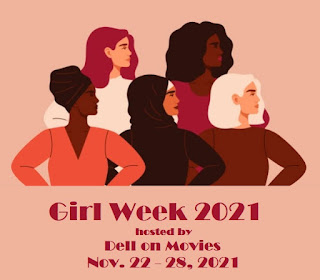 One of the best things about Dell's blogathon, Girl Week is that sometimes an actress or a film is put on your radar that wasn't there before. The film I'm going to talk about today is Annette, which was very talked about this summer (because its excellent) but I want to focus on one particular actress today, and how her small scene left such a huge impact.

While the majority of the film, the titular Annette is played by a puppet, but in the final 10 minutes, she's played by Devyn McDowell. Annette visits her father in prison, and tells him a lot of hard truths. She's never going to sing again, he ruined all of that for her, and she struggles with whether or not she should forgive and forget her parents. These are big emotions for a small child. Annette never should've been put in this position in the first place, but she is and what takes place is the best scene of the film. Devyn and Adam Driver sing "Sympathy for the Abyss" which is a beautiful, yet heartbreaking duet. The song's motifs call back to another ballad we've heard more than once before this - "We Love Each Other So Much."

Devyn is fantastic in this scene for a few reasons. She has a lovely voice, but she actually behaves like a child. There's no precociousness here. Where an adult actor might have a dramatic scene where they burst into tears, Devyn keeps it grounded. The lyrics are far beyond her years, but she fidgets in her seat and sings them with enough confidence where we know that she means them, but it doesn't come off as a performance. It feels so natural. Her 10 minutes left a huge impression on me, and I hope it did for many others as well. This girl is a star. See for yourself below: