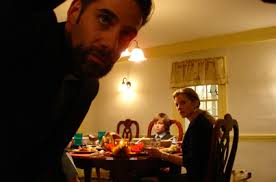 Another 'Found Footage' flick I picked up from Alex of And So It Begin's list last May.
David and Clare Poe (Adrian Pasdar and Cady McClain) live in a house out in the country with their 10 year old twins, Jack and Emily. (Austin Williams and Amber Joy Williams) At first, the Poes' come off as over-bearing parents that have their video camera on way too much, and the kids seem genuinely embarrassed and un-interested in their dad's "capture every moment!" mantra. Then thing get a little weird, from acting out at school, to torturing animals, there's clearly something wrong with Jack and Emily. Davis a pastor, he thinks they're possessed. Clare is a psychologist, she thinks they're sick.
Home Movie is really creepy, and at times, a little unbelievable. (Especially the situation with the police, which I won't spoil.) But one thing I actually really appreciated was that this didn't feel like a paranormal or possession movie. These kids were straight up sociopaths, and it's almost kind of refreshing to see a horror film centered around that without some underlying demon forcing them to do things. Working with at-risk kids myself, the parent's somewhat reluctance to believe their kids were capable of this, and not seeking help earlier was pretty spot on, I only wonder when they started noticing.
The final scene in Home Movie really makes the film worth while in my opinion. While it has it's moments of being repetitive, it's a quick watch. I'm going to go hug my kid now..
Grade: B-
Memorable Quote: "You did know you were hurting him, right?" - David (Adrian Pasdar)﻿
Indie Gems