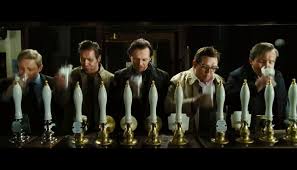 Gary King (Simon Pegg) is still living in his glory days. Back when he was a hot-shit teenager, Gary and his 4 friends tried to do their town's pub crawl. One night. 12 bars. 60 pints. They didn't finish. Fast forward 20 some years and Gary has sweet talked all of his friends (Nick Frost, Martin Freeman, Paddy Considine, and Eddie seriously I wanted to pummel you in Tyrannosaur Marsan respectively) into joining him for one last hurrah. Only their quiet little town seems to have been taken over by robots.
I never saw Hot Fuzz, so I don't know how it rates with Pegg and Frost's unofficial trilogy. Shaun of the Dead is still the best, but The World's End was certainly a good time. There's actually some pretty impressive fight scenes and CGI work in this flick. You'd think a comedy would have cheesier effects, these were quite good. The cast is brilliant, Frost and Pegg have obvious chemistry, and it's nice to see the lighter side of Freeman and Considine as well. Walder Frey even made an appearance, and he didn't even kill anybody! I have to single out the soundtrack too, it was awesome. The stupid little tunes they chose when these guys were walking from pub to pub were brilliant.
Let's talk about the ending. Going in, I heard some weren't pleased with it. I can understand why they would be, it was pretty heavy compared to the rest of the film, but I dug it. You definitely won't be able to say "I've seen this before" when you go to The World's End.
Recommended: Yes
Grade: B
Memorable Quote: "A man-baby!" - Andy (Nick Frost)﻿