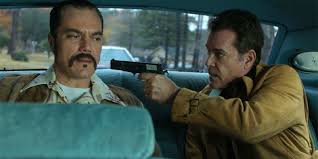 Richard Kuklinski (Michael Shannon) has a job dubbing porno movies. His wife, Deborah (Winona Ryder) thinks he dubs cartoons. When that job falls through, he's given another as a contract killer by a mob boss, Roy Demeo. (Ray Liotta) He excels at this, and his family has no idea.
I had never heard of the real Kuklinski until I stumbled upon this while reading Michael Shannon's filmography. This guy is fucked up. He killed over 100 people. I thought The Iceman really made an effort to show what a family man Richard really was behind the scenes. Though in real life, his wife accused him of beating her, the film never shows him raising a hand to her. He does, however, trash their house after an argument that SHE apologizes for. That floored me how dependant Deborah was on him.
Michael Shannon is awesome as always. When isn't he? He's at his best when he's playing someone creepy, but he plays the loving side as well. I cannot get enough of him. Winona Ryder gives a subtle supporting performance, and others such as James Franco and Chris Evans pop up and nail their parts as well. The Iceman may not be the best movie Shannon's done, but it's certainly interesting and never bores.
Side note: Don't search "The Iceman" without specifying you want the movie or Michael Shannon on Google Images. Just don't.
Grade: B
Memorable Quote: "Why are you acting like you don't give a shit?" = Roy Demeo (Ray Liotta)﻿
Indie Gems