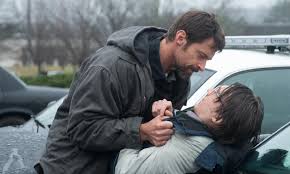 That lovely header is literally what a bunch of random people said aloud in the theater a few different times. Awhile ago, I talked about the pros and cons of watching movies in a theater vs on demand, and I wrote that during certain movies, I actually really enjoy my fellow movie goers' reactions. This was one of those movies.
Keller and Grace Dover (Hugh Jackman and Maria Bello) are having Thanksgiving dinner with their friends and neighbors, Nancy and Franklin Birch (Viola Davis and Terrance Howard) their two 6 year old girls go outside to play, and never come home. They're frantic, there was a suspicious RV being driven by a man named Alex (Paul Dano) but detective Loki (Jake Gyllenhaal) who is burdened with glorious purpose says they do not have enough evidence to hold him. Keller, slowly losing his mind and his faith kidnaps Alex himself in hopes of him confessing to the location of his and the Birchs' daughters.
Here's why I loved my fellow audience so much. There were plenty of audible gasps, an occasional laugh because of the look on Jake Gyllenhaal's face, or a line that comes out of his mouth. (He's subtly hilarious in this) Then there was the fact that so many people yelled "SHUT UP" during two points of the film.
The acting in this was top notch, like I expected. Hugh Jackman really does give one of the best performances I've ever seen. Jake Gyllenhaal proves to be the bright spot in this mostly bleak movie. Even though this situation is terrible, we still get a bit of a laugh in here and there. I only wish Paul Dano were given more to do. He's perfectly meek and fragile as Alex, but he doesn't get a whole lot of screen time, but he makes it memorable when he does. I don't expect crime thrillers to have stunning cinematography, but this one sure did. Especially when you think about the fact that they filmed this in Georgia, and made it look like Pennsylvania. The make up is definitely impressing as well, if you've seen this, I think you know what scene I'm referring too.
Prisoners is probably the best movie I've seen this year and could easily be an Oscar contender. With a two and a half hour run time, the film still manages to keep you on the edge of your seat throughout. (I had a death grip on my popcorn) I love it when I have high expectations for a film and it absolutely delivers.
Recommended: Yes
Grade: A+