DVD Review: Now You See Me 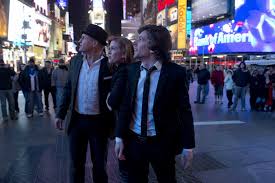 FBI agent Dylan Rhodes (Mark Ruffalo) and Interpol agent Alma Dray (Melanie Laurent) are tasked with tasked with trying to pin down four magicians (played by Woody Harrelson, Jesse Eisenberg, Isla Fisher, and Dave Franco) who rob banks during their shows and give the money to their audience. They're backed by a powerful benefactor Arthur Tressier. (Michael Caine) With the help of magician de-bunker Thaddeus Bradley (Morgan Freeman) they're in for a hell of a ride to say the least.
I have to admit, the spinning camera shots got annoying really fast, but I found this film quite fascinating. The special effects were great. All of the actors seemed perfectly cast, (Although I swear Morgan Freeman was about to say "Very good, Mr. Wayne" whenever he was talking to Michael Caine) and the ending packed a legitimate surprise. Overall, while I didn't expect much from this movie to begin with, I'm happy with what I watched. I'm interested in seeing what they do with the supposed sequel.
Recommended: Yes
Grade: B-
Memorable Quote: "Always be the smartest guy in the room." - Daniel Atlas (Jesse Eisenberg)﻿