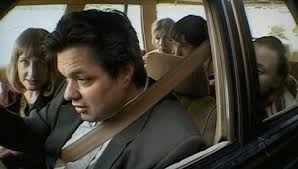 ﻿Pieces of April will forever be known as "that only film Katie Holmes was good in" for some. While I absolutely agree with that statement, this little film is far more than that.
Scatter-brained April (Holmes) and her boyfriend Bobby (Derek Luke) are planning to have April's estranged family over for Thanksgiving dinner. Her mother, Joy (Patricia Clarkson) is terminally ill. They've always had a rocky relationship. Coming with her is father Jim, (Oliver Platt) goody two shoes little sister Beth, (Alison Pill) brother Timmy (John Gallagher Jr.) and grandma Dottie. (Alice Drummond) The film is split between the family's long road trip and April's beat up apartment complex where she's forced to go door to door to cook her turkey after her stove breaks.
It's funny to me to see Pill and Gallagher as brother and sister after seeing them as potential love interests in The Newsroom. Patricia Clarkson is the real star of this film though. You can see the conflicts on her face. She's sarcastic, rude, but you can tell deep down that she has a heart and no matter how much she pretends to hate going to see April, she still loves her little girl deep down. Even if I hate to admit it, Holmes is good here too. It's easy to see why she's the black sheep of her family, but she's got a good heart.
Grade: A-
Memorable Quote: "Are you Wayne? Wayne with the new stove?" - April (Katie Holmes)
Indie Gems