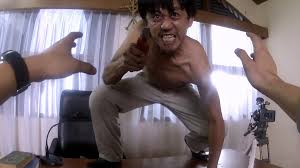 There are several things V/H/S/2 does better than it's predecessor. If you recall, I wasn't a huge fan of the first installment. ﻿ I'm going to split up each segment and review them separately again, because that's really the best way to approach this film: Like you're watching 5 different movies.


Tape 49 - The narrative basically follows two private investigators sent to find one of those little bastards from the first film. They mention early on the cops are not looking for "some college kid." Like any horror movie, of course the characters split up. Ayesha, while trying to see what is on this kid's lap top starts to watch the nearby VHS tapes. It built quite a bit of suspense through out, although it fell to far too many horror clichés.
Grade: B

Phase I Clinical Trials - This one is about a man who loses his sight in one eye after a car accident. His doctor is testing a camera in place of his eye. Everything he sees will be recorded for research purposes. He starts seeing dead people (ha!) when he gets home. A girl he saw at the doctor's office earlier stops by his house to explain that she can hear them. (She has a cochlear implant) When another one shows up, she whips off her shirt and starts fucking this guy because why the hell not? Tits.  Besides that ridiculous and unnecessary scene, this one was legitimately creepy with its quick cuts in the dark. You kind of have to leave logic behind on this one. Why would something as high tech as a camera in a person's eye be converted to a VHS tape? Who knows.
Grade: C

A Ride in the Park - "You ride that bike more than you ride me" a girlfriend on the phone tells her boyfriend, who's out on a bike trail equipped with a helmet cam. Really? Anyways, this poor chap runs into zombies. The whole thing felt a little amateur and offered little originality until the last few seconds. There's so many zombie movies/shows out there, that even though the last shot was completely brilliant, it couldn't save this one.
Grade: C-

Safe Haven - A film crew is trying to show an un-bias view on a cult in a foreign country. We know the leader is totally bat shit crazy (And the guy that played him was perfect) but it was still hard to predict where this was going at the beginning. This one was easily the shining star of this film. It was creepy and ultra-gory. There was a small zombie aspect to it, and that got repetitive, but overall this one was by far the best.
Grade: A

Slumber Party Alien Abduction - This one was so fucking awful I don't know where to start. A bunch of young boys play pranks on each other, on their older sister, and vise versa, all while the camera is attached to their dog. Then Aliens show up. I hated the fact that we had to hear this poor dog whine through out, then we had to watch it die. The alien costumes looked cheap and fake, and it sounded like they just used a bunch of stock footage from Jurassic Park. I can't believe they ended the film with this tape. They should've ended with Safe Haven.
Grade: F

Recommended: Yes. The concept is still very interesting. Skip V/H/S and only watch this one, Safe Haven makes it worth it.