- November 24, 2013
The pigs in this movie actually serve an important purpose. 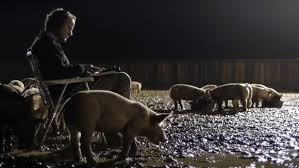 I'm really not sure how I feel about Upstream Color as a whole. I tried to let this film sink in after I viewed it, but it's just as blurry to me now as it was when I watched it.
A woman named Kris (Amy Seimetz) is drugged and hypnotized by a strange substance that the thief (Thiago Martin) has discovered in a plant, and transferred into a worm. He tricks Kris into giving him all of her money, and sets her free. She has no idea what happened or why she's all of a sudden drawn to a man named Jeff. (Shane Curruth) Turns out, they were both victims of this hypnosis, and now they're stuck navigating the world as if it were a dream.
I can handle narratives like this in small doses, but this film felt like it was trying to be Terrance Malick Jr. I should probably just copy and paste my Tree of Life review here). There was an interesting plot there. There really was! But it didn't feel connected properly. Sure, that's probably how Kris and Jeff felt, but it doesn't make for good story telling when you've got something interesting to say, but you spend half the film wondering aimlessly before you get to the point, and then *poof* it's done.
I remember reading a review on this film where it said "You don't watch this film, you experience it." I definitely agree with that. This isn't a bad film. I won't call it a bad film, it's just not MY kind of film. If I wanted a cloudy vision on something cerebral, I'd just go smoke some weed and watch Inception again.
Recommended: I seriously have no idea. I personally wouldn't watch it again, but movies like these do have a fan base and the plot really is interesting when you break it down.
Grade: C+
Memorable Quote: "I can't find them anywhere..." - Kris (Amy Seimetz)﻿