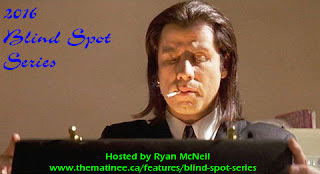 What I knew going in: That it was a big Oscar winner.

Doyle ( Gene Hackman) and Russo (Roy Scheider) are two narcotics cops attempting to bust a big heroin ring. Doyle is a bit of an alcoholic, and sometimes their tracking methods aren't exactly by the book.

There's a lot of prestige around this movie, and I felt a little bad that I thought the beginning was so slow. I didn't find myself that interested in the crime at large here. It's not until about 40 minutes from the end that this movie really steps its game up and becomes incredible.

It's very much a Friedken film. I always say he's a bit of a horrifying director in that he has some startling imagery. He does here too. Even though we don't have Regan from the Exorcist or the paranoia of Bug, he manages to be very forceful, especially in scenes involving Doyle chasing a subject.

Hackman is excellent here. You undoubtedly side with him as he's trying to bust someone for drugs, but he's such an unlikable guy it makes you question it. The score fits perfectly, but I wish the first hour of this film was as exciting as the last.