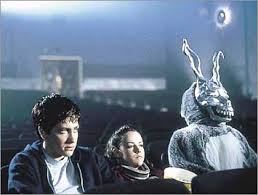 Troubled teen Donnie Darko (Jake Gyllenhaal) follows a giant rabbit named Frank out of his house one night. Frank tells him the world will end in 28 days. When he returns home, a jet engine has crashed through his bedroom ceiling. While he contemplates the reason for his survival, he continues to follow Frank's suggestions, even as they become stranger and cause more chaos.
One thing I'm not going to get into this review is my theories on it. If you've ever researched Donnie Darko you've probably found out that there are two versions, the original and the director's cut, and that the latter basically spells the movie out for you, where the former leaves a lot to your imagination. I think that's actually pretty off putting. There's just too many arguments out there. Watch it for yourself, form your own opinion, then join the discussion if you wish.
Jake Gyllenhaal is wonderful as a disturbed teen here. (Though I swear this movie made me enjoy The Day After Tomorrow less because I was like 'Why is Jake Gyllenhaal still a teenager?") Bit parts by Maggie Gyllenhaal and Jena Malone are great too. The movie raises a lot of questions, and is really just very interesting to watch. Not to mention this is the creepiest rabbit costume you will ever see.
Grade: B+
Memorable Quote: "I can do anything I want." - Frank (James Duval)﻿
Indie Gems