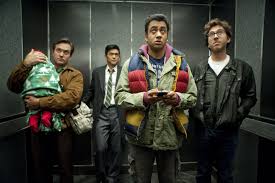 It's painfully obvious who this film is marketed to, but because of that, we don't have to take this film seriously. At all.
Six years have passed since their stint in Guantanamo Bay and Harold (John Cho) and Kumar (Kal Penn) have grown up and grown apart. A mysterious Christmas package brings them together again, and soon they find themselves burning down Harold's father in law's (played by Danny Trejo) prized Christmas Tree. They are now on a mission to replace it, and they run across a few familiar faces along the way.
If you ignore the obvious 3D pandering shots, Harold and Kumar is still pretty damn funny. Of course Neil Patrick Harris makes a womanizing appearance, and his real life husband David Burtka does too. It's hilarious, and easily one of my favorite cameos ever. The plot is ridiculous, beyond ridiculous in fact, but you can't help but love the chemistry that Cho and Penn have. I do enjoy watching them.
Recommended: Yes
Grade: B-
Memorable Quote: "They serve pancakes in Hell." - Wafflebot (voiced by Eric Kissack)﻿