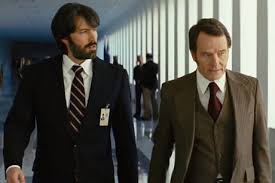 In 1979 the American embassy in Iran was invaded. All inside were held hostage, but six managed to escape and seek refuge at the Canadian Ambassador's residence. The CIA needs to get them out of the country and their best "bad option" is suggested by Tony Mendez: (Ben Affleck) He will go to Iran and they will pose as a film crew scouting locations for their upcoming desert sci fi flick. They enlist the help of some reputable Hollywood contacts. (Played by Alan Arkin and John Goodman) While Jack O'Donnell (Bryan Cranston) stands by at the office, Mendez goes to put this crazy plan in motion.
The funny thing about this film is how suspenseful it felt even though I already knew how it would end. I was literally on the edge of my seat the entire time. As if Affleck was going to pull a Tarantino and re-write the end of history. The true story Argo is based on was always an uplifting one. A perfect example of the U.S and Canada working together. (aww) The group of people that play the refugees here are not just random faces, they all get us to feel sorry and scared for them. They make the audience care about their well being. Bryan Cranston stood out the most for me in this film. Even though he wasn't in Iran with the rest of them, his performance often going from subtle to in your face angry is just another reason why I love Cranston so much. He is the one who knocks. Arkin and Goodman provide quite a bit of comedy for a film like this. Affleck gives his best performance in years. Normally the one thing I say that the one thing I don't like about Affleck's directing is that he casts Affleck the actor. I can't say that here, he was wonderful.
Recommended: Yes
Grade: A+
Memorable Quote: "No, I'm shouting his name because I'm fucking him." - Unknown. (Seriously, I don't remember the name of the character that said that, but that line was hilarious and needed to go here.)﻿