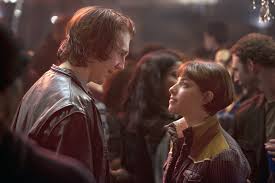 That was the name of the memoir this is based off of. I think it would've been an awesome title, but I see why they changed it.
Nick Flynn (Paul Dano) isn't quite sure what he wants to do with his life. He wants to be a writer, but for now that doesn't pay the bills. Nick's father, Jonathon (Robert DeNiro) has been absent his entire life. He only writes letters. Jonathon thinks he's one of the best writers that America has to offer and that publishers desperately want his novel. When Jonathon abruptly makes contact with Nick, he's not so sure what to do. Later, as Nick works at a homeless shelter, his father shows up and becomes a resident. Obviously, this isn't easy for Nick.
I'm surprised at how limited of a release this film got when it's easily one of the best things DeNiro has done in a long, long time. Jonathon is erratic, preachy, racist, unpredictable, delusional, and DeNiro plays him perfectly. One minute he's kind, the next he is yelling, and pretty much everything that comes out of his mouth is pure bullshit. Dano, in another wonderful performance plays Nick subtly. He's the main narrator, though DeNiro narrates a bit himself, and it's easy to see Nick's struggle. His mother committed suicide when he was 22 and it still pains him. It's like he's drifting, and his father showing up and subsequently making things harder for him is what really kick starts Nick into his successful career. Being Flynn has a great supporting cast as well in Julianne Moore, Olivia Thirlby, Chris Chalk, and Thomas Middleditch among others. Being Flynn is a film that needs to be seen.
Recommended: Yes
Grade: B+
Memorable Quote: "We were put on this Earth to help people, right?" - Nick Flynn (Paul Dano)﻿