Review: The Perks of Being A Wallflower 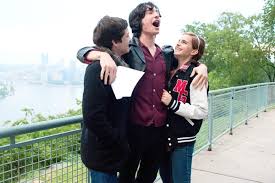 Charlie (Logan Lerman) is a shy freshman that is not looking forward to high school. He has a hard time fitting in and he's haunted by troubles in the past. He takes a chance and approaches a flamboyant senior, Patrick. (Ezra Miller) Patrick introduces Charlie to his music loving step sister, Sam (Emma Watson) and their circle of friends. Charlie finally starts to feel accepted, but he's torn between his crush on Sam, the relationship he's gotten himself into with Mary Elizabeth, (Mae Whitman, who if you remember was bi-furious in Scott Pilgrim vs The World) and the fact that all of his senior friends will be graduating while he's still stuck in school.
Logan Lerman is really starting to shine in his best role to date. While Emma Watson, like in the Harry Potter films is the weakest acting link, the show really belongs to Ezra Miller. His character ranges from being the life of the party to broken hearted and Miller easily pulls it off. He commanded attention previously in We Need To Talk About Kevin, and he does so here as well.
I've never read the book on which this movie is based on, so the ending surprised me for sure. I can appreciate the places this book/film was willing to go to show how some teens cope with trauma. Even though the message is dark, Perks still manages to have a few laughs and a lot of catchy songs throughout.
Recommended: Yes
Grade: B
Memorable Quote: "...that's fucked up." - Patrick. (Ezra Miller)﻿