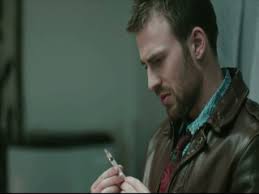 ﻿Mike (Chris Evans) and Paul (Mark Kassen) are two young personal injury lawyers who take on a tough case. Nurse Vicky (Vinessa Shaw) contracted AIDS a few years back when she was accidentally pricked with an infected needle in the ER. A man named Jeffrey Dancort (Marshall Bell) has now invented a one time use needle that could save millions of lives, but no one will buy it. Mike, who is a struggling addict himself is determined to win this case, but he has a lot of hurdles to leap through.
This film is based on a true story, and an intriguing one at that. It's sad that so many needles are being reused around the world when one exists that would prevent disease from spreading. Chris Evans really nailed this in my opinion. This movie could've easily come off as a longer episode of Law and Order, but his performance saved it from being just that. He's really growing on me as an actor and not just as a piece of eye candy.
Grade: B
Memorable Quote: "Was she wearing white shoes? He hates white shoes." - Mike Weiss (Chris Evans)

On a side note: This is Indie Gem #100 for Rambling Film!
Indie Gems