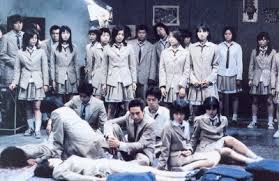 In Japan, a 9th grade class is picked at random to fight in a Battle Royale. All 42 students are fitted with an explosive collar, given a bag with one random weapon, a map, and some food rations and sent off on an isolated island. Their objective? They must kill each other one by one in 3 days time. There can only be one winner. If more than one person is still alive by the end of the 3rd day, they all die. The film spends time with the different students. We learn who they are and where they came from. Not everyone is meant for this game.

I first heard of Battle Royale when The Hunger Games came out. Many accused the film/novel of ripping Battle Royale off. Really, there's only a few similarities. The biggest being there's kids killing kids. Battle Royale is much more brutal. Not just the gore factor, but the fact that unlike The Hunger Games these kids actually knew each other prior to the game. (In The Hunger Games, only the tributes from the same distract may have been familiar with one another) These kids have spent enough time together to form bonds, fall in love, and bully one another. If you're a bully, your victims may not be so afraid of you with a gun in their hands. While most of Battle Royale revolves around Shuya Nanahara (Tatsuya Fujiwara) and Noriko Nakagawa,(Aki Maeda) we still get a look at plenty of the other students. Some embrace the game, some refuse to play and commit suicide. There's different circumstances all around. I have to point this out - the picture I used, with the children in the classroom hearing the rules of the Battle Royale for the first time is absolutely chilling.

This movie is currently on Netflix Instant, and it definitely needs to be seen. Even if you are just curious about comparing it to THG.