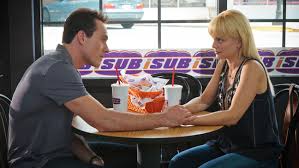 I see American Pie as the teen movie of my generation. I was in middle school when it came out and nobody's parents wanted us to see it. The nostalgia factor is strong with this one.
East Great Falls High is having their 13 year reunion and we meet up with our former horn ball teens and see where they have ended up in life. Jim (Jason Biggs) is still married to Michelle (Alyson Hannigan) and they have a young son. Oz (Chris Klein) is a famous sports anchor who appeared on "Celebrity Dance off" and has a hot young girlfriend. Kevin (Thomas Ian Nicholas) is an architect who works from home and dotes on his wife. Finch (Eddie Kay Thomas) is mysterious as ever, and Stifler (Seann William Scott) is exactly the same. Apparently that reality check he got in American Wedding didn't work out. They all meet up back home and of course, things get out of control.
It's nice to see where they all ended up, and American Reunion does it's best to bring back all the original class, even if some parts are small. The majority of the laughs really don't start until they hit the actual reunion, which is in the last 30 mins or so of the film. The beginning has a chuckle here and there, but nothing special. They've toned down Stifler a bit from the previous film (thank God) but his story feels very repetitive. This film is definitely better than American Wedding, it's not great, but it has it's laughs and sometimes it's good just to have that nostalgia. Also you can never go wrong with a little John Cho.
Recommended: Yes
Grade: B-
Memorable Quote: "It wasn't the handle side either!" - Stifler's Mom (Jennifer Coolidge)﻿