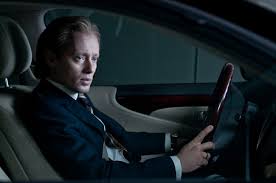 Roger Brown (Aksel Hennie) is a headhunter that lives above his means. He's self conscious about his short stature and is constantly afraid his wife will leave him. So be buys her plenty of expensive things, and funds it by stealing expensive art work on the side. Then he meets Clas Greve (Nikolaj Coster-Waldau) who is perfect for a job that Roger is trying to recruit. He also happens to own a very expensive piece of art. However Roger will soon learn that stealing from Clas is not a good idea.

Roger is an interesting protagonist because he's so flawed to begin with. At first, I was actually kind of rooting for Clas to kill the guy. I loved how intricate the film felt. Roger goes to some extreme measures to avoid Clas and cover up his tracks. Even though he's clearly the weaker of the two, Roger always managed to survive.

I'm a fan of Coster-Waldau, and while his character is pretty one dimensional  he's still fun to watch, but Aksel Hennie really impressed me here. This is the first film that I've seen him in, and I definitely want to see more.

Memorable Quote: "The one thing that she wants most is the one thing I won't give her." - Roger Brown (Aksel Hennie)﻿
Indie Gems