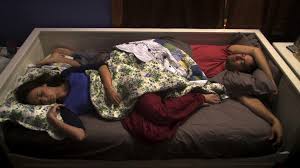 Jack (Mark Duplass) has had a hard time after the death of his brother. His close friend Iris (Emily Blunt) tells him to go to her family's secluded cabin for some much needed alone time. When he arrives, Iris's half sister Hannah (Rosemarie DeWitt) is already there after a nasty break up with her girlfriend. There's a lot of tequila, lots of secrets, and when Iris shows up the next day, things just turn complicated.
If you haven't seen this film, I'm going to explain something that drove me nuts: Iris is British, Hannah is American. The story is their dad met Hannah's mom in the U.S, then 10 years later went to London and met Iris's mom, so she was raised there and came back to the US with them. The fact that they were sisters with different accents got on my nerves until they explained it about half way through the movie. I know, it's weird.
Anywho - Your Sister's Sister was a cute little film to watch. The leads all had great chemistry together, and the story was different. The only thing I'm torn on is the ending. Part of me wanted to love it, the other part thinks it's a bit of a cop out.
Grade: B
Memorable Quote: "I'm just so happy that you are here." - Iris (Emily Blunt) ﻿
Indie Gems