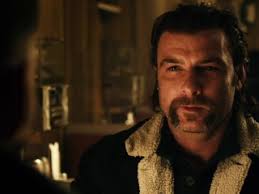 I honestly don't remember if Goon was in theaters near me. I can see why I would write something like this off without seeing it, but as I saw it on Instant Netflix, I figured I'd give it a try. I'm glad I did.

Goon is about Doug Glatt. (Seann William Scott) He's a naive bouncer that's a hell of a fighter. One day he beats up a local hockey player so badly that they offer him a spot on the team just to fight. Then he catches the eye of a semi pro hockey coach that puts him on his team to fight, while trying to straighten up his fallen protigy LaFlamme. (Marc-Andre Grodin) Then there's Ross Rhea, (Leiv Schreiber, with the most badass goatee you've ever seen) he's the ultimate thug on the ice. And soon, he'll get to go face to face with Glatt.

This movie was hilarious and actually pretty spot on when it comes to local to semi pro hockey games. I was laughing for nearly all of the first 15 minutes thanks to Jay Baruchel, who plays Doug's annoying friend from Boston.  I loved the over the top Canadian accent one of Doug's team mates had. Growing up so close to Canada, I can tell you that most of them don't sound like that, but it's always refreshing when you meet someone who does. I love it. There's lots of laughs in Goon, and lots of blood. It's definitely worth checking out.

Memorable Quote: "You make me want to stop sleeping with a bunch of other guys." Eva - Alison Pill﻿