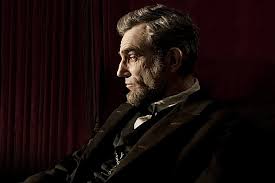 This is a question I have been asking myself. More on that later.
The Civil War rages on and President Abraham Lincoln (Daniel Day-Lewis) is trying to pass an amendment that would abolish slavery in the United States. However, like all political decisions, not everyone agrees.
Director Steven Speilberg walks a fine line between obvious Oscar bait and a history lesson with his latest. Luckily, there are fine performances all around. Especially by Day-Lewis, who feels like a lock for Best Actor after watching this film. The supporting cast is beyond impressive and includes big names such as Tommy Lee Jones, Joseph Gordon-Levitt, Sally Feild, (although she looks old enough to be Lincoln's mother rather than his wife) David Strathain, John Hawkes, Joseph Cross, James Spader, Hal Holbrook, Jackie Earle Haley, Jared Harris and Michael Stuhlbarg. Many other recognizable faces pop up here in there. There's so many great people that some of them feel a bit wasted.
I found the scenes where the House is discussing the bill to be the most interesting. At times it even made Lincoln himself feel like an afterthought. Although when Lincoln is on screen he commands attention. But this brings me back to my previous statement about the time of day when I watched this. The showing I went to was at 11:00pm. It was late, I worked a long day so this was the only show time I could make. I have to say the movie felt way too long. Especially after the bill itself is passed, it felt like an eternity to get to the ending. I'm not sure if I would've felt this antsy had I seen the film at a reasonable hour. Lincoln reminds me a lot of The King's Speech. A good movie all around, but it's not something I'm dying to see again.
Recommended: Yes
Grade: B
Memorable Quote: "I can't lose you." - Abraham Lincoln (Daniel Day-Lewis) ﻿
﻿