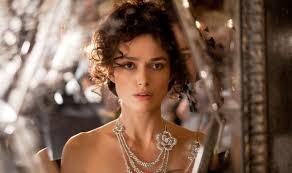 In 19th century Russia, Anna Karenina (Keira Knightley) is suddenly attracted to Count Vronsky (Aaron Taylor-Johnson) even though she's been married to Karenin (Jude Law) for years. How will acting on these feelings effect her and those around her?
Joe Wright makes some beautiful movies, and Anna Karenina is no exception. Everything is lavish and beautiful. The jewels that Anna wears stood out the most to me. They were lovely. The way the scenes change is interesting too. It almost felt like a play, with the characters walking from stage to stage and each scene blending in to each other. I thought that was a nice touch. I loved the dancing in the movie as well. The film is a visual masterpiece, but does it have substance story wise?
A little. I have to admit I never read the novel, nor have I seen any other adaptations. Anna is an interesting character, her emotions are all over the place. Sometimes I felt myself wishing she had been born in another era. Where what she had done isn't considered so controversial. The one actor that really stuck with me was Jude Law. He doesn't have a lot to do, but he wears his feelings on his face and I thought he was just tremendous in this part. It's very rare that I use "Jude Law" and "tremendous" in the same sentence. There is another story line involving a man name Levin (Domhnall Gleeson) that felt a lot like unnecessary filler to me. Apparently he's a bigger character in the book? I did enjoy the actor, but his scenes just felt a little random.
I expect to see Anna Karenina in the Costume Design and maybe even Art Direction categories at the Oscars. I think giving this film an R rating will ultimately hurt it in the long run. There is no reason for it. No excessive language, no nudity, what's the deal?
Recommended: Yes
Grade: B
Memorable Quote: "You have to love Papa, he's better than me." - Anna (Keira Knightley)
﻿