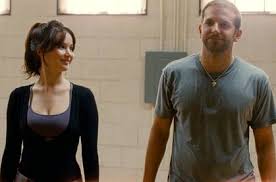 ﻿Pat (Bradley Cooper) has just gotten out of of the mental institution. He's been there for the last 8 months because he beat up his wife's lover, and at the time had an undiagonsed bi polar disorder. He's determined to reinvent himself. He sees the silver lining in everything, and he knows if he works hard, his wife Nikki will take him back. He lives with his parents (played by Robert Deniro and Jacki Weaver) don't agree, but are hoping for the best. Through his friends, he meets Tiffany (Jennifer Lawrence) a recently widowed young woman with plenty of issues herself. When Tiffany offers something to Pat that he cannot resist, he decides to enter a dance competition with her.


Tiffany and Pat are both very unstable people, and I thought Cooper and Lawrence portrayed them perfectly. They never felt fake or over the top. Maybe it's because I work with young kids with mental illnesses that made me appreciate it so much more. (and laugh out loud at the Trazadone reference - that stuff really will knock you on your ass) If anything can be taken away from Silver Linings, I hope it shows that mental illness is not something to be ashamed off, but something you seek help for. It can be cured. Ok, enough of that tangent, let's focus on how awesome this movie is. The acting is top notch. Lawrence is the MVP, her Tiffany made me laugh and nearly cry. Bradley Cooper is also much better than I ever gave him credit for. I'm used to him as just a pretty face. That's not true here, he matches Lawrence punch for punch and turns in the most brilliant performance of his career. The supporting cast of Weaver, Deniro, Shea Wingham and Chris Tucker is wonderful as well. While the movie has plenty of serious situations, it's full of laughs (and F bombs) and it sends you off on a feel good note.

Memorable Quote: "I have no filter when I talk." - Pat (Bradley Cooper)