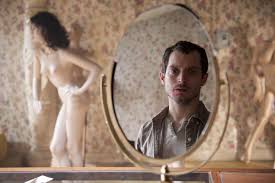 ﻿Okay, so technically yesterday was the last day of October, but really anytime is a good time for horror.
Maniac follows Frank (Elijah Wood, who I'm officially adding to my list of Creepy Fucks in Film this year, along with Peter Sarsgard in Lovelace and Sharlto Copley in Elysium) a timid antique mannequin owner with more than a few issues. He suffers from migraines, hallucinates, and judging from that, he has some serious mommy issues. He also happens to be a serial killer. We see him stalking and murdering several women. He scalps them and brings their scalps back to his shop to decorate his mannequins with. He eventually meets Anna, (Nora Arnezder) a French artist that is interested in using his mannequins in one of her shows. This friendship alone is enough to make us fear for her.
Maniac is shot almost entirely from Frank's point of view. At first, we only see Elijah Wood's face when he sees his own reflection, and only a few vital moments actually let us things from our own point of view and not his. I thought that was a very interesting thing to do. This film made a lot of checks off the typical slasher film list (Boobs, people running to stupid places, no one has a cell phone) yet it strangely felt fresh. The score was incredible (and I shit you not, the credit goes to a guy named Ron. Just Ron.) It was like a mix between Drive and Halloween. It's also incredibly gory, we're talking very in-your-face gore here.
This is currently on Netflix Instant in the U.S. I definitely recommend watching it if you get the chance. (Side note: I never did see the original. This one is a remake)

Grade: B+
Memorable Quote: "I came all the way across town to be with you in your time of need." - Frank (Elijah Wood)