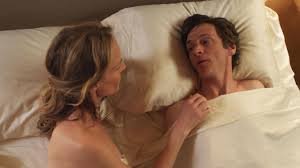 Sorry, I couldn't resist that header. Helen Hunt's accent was so distracting.
Set in the late 80's, Poet Mark O'Brien (John Hawkes) was stricken with polio when he was young. Now he spends a minimum of 20 hours a day in an iron lung. One day, he decides he no longer wants to be a virgin. After seeking his priest's (William H. Macy) council, he hires Cheryl (Helen Hunt) a sex surrogate to guide him through sex and teach him about his body.
Hawkes and Hunt give great performances. It's no doubt they were Oscar worthy (Hunt got nominated, Hawkes did not, unfortunately) but when you look at the rest of the movie, I hate to say, but it's rather boring. The thinly veiled plot doesn't feel complete. It feels like just a synopsis, much like the one I gave you in the first paragraph. Nothing else really happens. There was potential here and there, but each bit was brief and without conclusion. This was based on a true story, and I have a feeling that the real Mark O'Brien was far more interesting than this movie let on.
Which brings me to this question, can a film rest on performances alone? Or does it need the script to back it up? Absolutely. If the performances in this film had not been so superb, this movie would've been a flat out disaster. With them, it becomes just okay.
Recommended: Yes, for Hawkes and Hunt, because they are extraordinary, but don't expect much else.
Grade: C+
Memorable Quote: "Then please visit as often as you can." - Mark (John Hawkes)
﻿