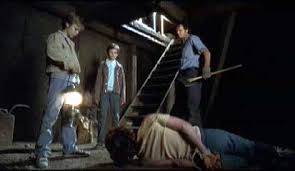 Fenton Meiks (Matthew McConaughey) is telling FBI agent Wesley Doyle (Powers  Booth) about how his father (Bill Paxton) was "asked by God" to commit murders when he was a child. The people he was killing were "demons" and he forced Fenton and his brother to help him cover it all up.
I had actually never heard of this film until just recently when it was on IFC. I have to say, all of the actors give fine performances, especially the young actors. (Matt O'Leary and Jeremy Sumpter) But what I like most about this film is that it actually goes there, so to speak. I don't want to spoil anything, because there's plenty of turns along the way, but Paxton (who also directs) and writer Brent Henley really do have balls the size of church bells when it came to this movie. I did not expect it to end the way it did.
Stay away from spoilers and watch this if you get the chance. It's definitely worth your time.
Grade: A
Memorable Quote: "Don't cry for her son, she wasn't human." Dad (Bill Paxton)﻿
Indie Gems