Rambling TV (the "Behind The Candelabra" edition) 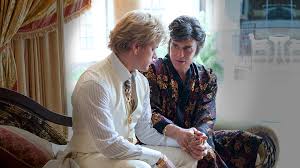 Scott Thorson (Matt Damon) didn't expect to catch the famous Liberace's (Michael Douglas) eye when he goes to see him in concert. What follows next is a recounting of their six year relationship. Ups and downs included, of course.
This movie was Ritzy to say the least. Everything was so pristine and beautiful and I actually thought to myself: "So HBO apparently gave this film a huge budget, but the producers of Game of Thrones had to beg for more money to make Blackwater?" I felt a little bad for thinking that afterwards, but it's true. This movie was like watching the ridiculously wealthy's life in a snow globe. (Made out of Austrian crystal and solid gold, of course)
I have to say, I didn't know much about Liberace going in to this. I was watching this with my mother, who was apparently shocked when she heard Rock Hudson was gay, but even more shocked when she realized people actually thought Liberace was straight. It was interesting having her input, though I don't think she liked it as much as I did. Douglas and Damon were top notch here. They're going to have a hell of a competition between them come Emmy season. (Unless they make Douglas go supporting, but really, he was a lead.) Apparently the real Scott Thorson was only 17 when he hooked up with Liberace, so Damon's casting is very interesting here.
Recommended: Yes
Grade: B
Yes, this is a poor edition of Rambling TV for me. With Big Bang Theory done for the season, and Game of Thrones taking the week off. Behind the Candelabra was the only new thing I watched this week.  I could tell you how the Minnesota Twins have been playing, but I'd probably just cry.﻿
Rambling TV