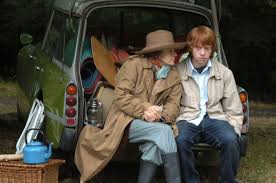 Ben (Rupert Grint) is a shy awkward teenager and aspiring poet. His mother (Laura Linney) is a bit over-bearing and Ben really just needs a break. He begins to work for Evie (Julie Walters) a retired actress who takes him under her wing. They enjoy each other's company and Evie guides Ben through the troubles of being a teenager on the brink of adulthood. Eventually Ben gets enough nerve to get laid AND tell his long time crush to fuck off. Brilliant.
I guess I have a soft spot for "coming of age" stories. This one stood out to me because at the time, it was the only thing Rupert Grint had done besides Harry Potter. (aside from some terrible sounding kids movie called Thunderpants) This is also one of the rare occasions where I actually purchased a DVD before viewing it. (Because I could not find this ANYWHERE in the States when it first came out) Grint and Walters have awesome chemistry together and great comedic timing.
This isn't their best work, but it's a fun little film to watch, and was even more enjoyable upon a repeat viewing. I still think Grint is the strongest actor of the Potter kids, so I look forward to the new films he's got coming out this year. This one is a must see for any fan of his.
Grade: B-
Memorable Quote: "....Thanks for having me." - Ben (Rupert Grint)﻿
Indie Gems