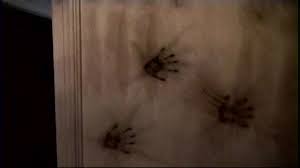 This film was quite the chore to get through. When this hit the SXSW film festival last year, many were raving that it was one of the best horror films they've seen in ages. But when more people started seeing it, it got it's fair share of negative reviews as well. I can see why.
First, let me say I love the idea of this film. A couple of guys are sent to an old house to find a certain VHS tape, we see them watch a few looking for the right one. The idea itself really works. It's just poorly executed. Since this is basically like watching 6 short films, I'm going to talk about them and rate them separately.
1) Tape 56 - This is the main story. It starts with a bunch of dudes running up to women and pulling their shirts up to expose their breasts. This was totally unnecessary. These guys eventually get paid by an unknown person to go to a house and find a VHS tape. As they are looking, strange things began to happen. They start watching the tapes. (thus giving us our other stories) But really, I couldn't give a fuck about these guys because we just saw them sexually assaulting an innocent person. Why do I care if some crazy person is trying to kill him? Also it cuts in and out from a scene of one of the men about to have sex with his girlfriend. Because this needed more nudity I guess? Grade: F Stupid all around.
2) Amateur Night - 3 annoying drunk frat boys meet some girls at the bar, then bring them to a hotel to have sex with them. One of them passes out, and his friends talk him out of having sex with her. So they move over to the other girl who has been acting a little strange all night. Of course she gets naked, and the boys soon find out she's not what she seems. Grade: F Somewhat creepy, but again, why do I care about drunken frat boys that are stripping some girl naked so they all can have sex with her.
3)Second Honeymoon - a married couple are at a wild west themed hotel. Since this movie is apparently all about boobs, the husband tries to get his wife to strip for the camera. *yawn* While they are sleeping, someone comes in, takes their video camera, and slowly runs a knife over the wife's sleeping body. This can't end well. Grade: D- predictable, but very realistic gore.
4)Tuesday the 17th. Four friends visits one of them, Wendy's hometown. She leads them through the woods to a lake, all while telling them a crazy story about a killer in the woods. She laughs it off as a joke, but is she really joking? Grade: D The story itself is pretty interesting, but is it possible for ANY dude in this movie to not point their video camera at a woman's body in inappropriate places?
5)The Sick Thing That Happened to Emily When She Was Younger - Logic aside, this is probably the best tape of them all. This is told from the point of a video chat. (Because apparently someone would go to the lengths to burn this onto a VHS tape) A young man talks to his girlfriend who tells him that she thinks her apartment is haunted. She walks her laptop around her house to prove it. Also it starts with the obligatory tit shot. Grade: C I actually liked this story. The low grade is for yet another random nude female. (I should point out that technically one of the guys in amateur night was nude too, but there's no lingering shot like it is when the girls are on camera.)
6) 10/31/98 - Four men dress up to go to a Halloween party at a house they've never been too. When they arrive, the house is empty, upon further investigation they find some sort of ritual going on in the attic. Grade: C- Finally, a sketch with no nudity or boob shots. This one was pretty creepy, and the effects were neat, but the way the camera kept cutting in and out really hurt it.
My apologies if my review turned into a feminist rant, Actually, I'm not really sorry. This movie sucked.
Recommended: No
Overall Grade: F
Memorable Quote: "Do you see him?" - Emily (Helen Rogers)
﻿