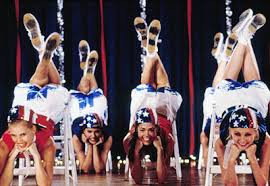 *My blog usually consists of new releases and independent films that I love, but when I think about it, I have quite a few guilty pleasures. Here's one of them*

The late 90's was when Kirsten Dunst's status as the new "it girl" really took off. 1999 was a good year for her. She had 3 small movies that she had made. Drop Dead Gorgeous, Dick, and The Virgin Suicides. While the latter was the most popular, I want to talk about Drop Dead Gorgeous, which remains one of the few chick flicks I can stand.
Amber (Kirsten Dunst) is a teenager growing up in a *fictional* small down in Minnesota. She's a talented tap dancer, which she practices while working at her job at the funeral home, putting make up on the deceased. She's auditioning for the American Teen Princess pageant, which is a pretty big deal in her small town. Her stiffest competition comes from Becky (Denise Richards) the richest girl in town, and her opportunist mother, Gladys. (Kirstie Alley) Brittany Murphy and Amy Adams also star as Amber's classmates, friends, and contestants.
So Kirsten Dunst has been one of my favorite actresses for a long time, and this movie is part of that. I tap danced when I was a kid, so seeing my favorite actress tap dance in a movie was pretty damn cool for me. Then there was the fact that I had the same shirt that Amber had in the movie. That was a big deal. Drop Dead Gorgeous is seen through the eyes of a TV crew that is covering the pageant. So mostly all of the characters are talking to the camera. I like when films are shot like that. They work great for comedies. Of course the Midwest accents are over the top, but there were a few stereotypes in there that were kind of spot on. The film is crude, catty, and at times, very over the top. I can't help but love it.
Memorable Quote: "Ma still cries every time she sees a tilt-a-whirl or a fat lady in a tube top."