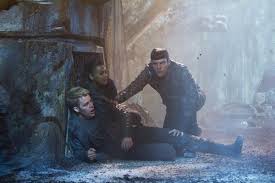 We're back with our crew of the U.S.S Enterprise. Kirk (Chris Pine) just risked a mission to save the life of his best friend, Spock. (Zachary Quinto) Of course, Spock tells him it's illogical and gets him in trouble. This leads to Kirk losing the Enterprise and his crew. Then, a Star Fleet member called "John Harrison" (Benedict Cumberbatch) comes along wreaks havoc on everyone. Kirk is told to go after him. But there's more. There's always more. Kirk and company have never faced a force like John Harrison.
I've been reading a lot of mixed reviews on this, which surprised me because I absolutely loved it. I thought it was a hell of a ride. I never tire of hearing that awesome score and seeing a shot of the Enterprise going into warp speed. Director J.J Abrams even toned down the lens flare! One of my favorite things about this movie was the relationship between Kirk and Spock. Quinto and Pine are both great in their roles, and I feel a little bad for not regarding Pine as a strong actor before. He's clearly strong here. Kirk and Spock's bromance is in full swing. Hell, they should probably be dating instead of Spock and Uhura. (though I'm a little sad we didn't get more tender moments between them) Benedict Cumberbatch is a perfect baddie as well. He is very menacing, and it's very clear early on that he's not one to be messed with.
Bones' (Karl Urban) dialogue seemed way over the top at times, but it kind of works for his character. I liked that Sulu (John Cho) got to sit in the Captain's chair for a bit. The final act seemed a bit rushed, and Alice Eve's scene in her underwear was incredibly pointless, but overall, this was a great film to watch. I think I may even like it better than the first one.
Recommended: Yes
Grade: A
Memorable Quote: "Mr. Sulu, remind me never to piss you off." - Bones (Karl Urban)﻿