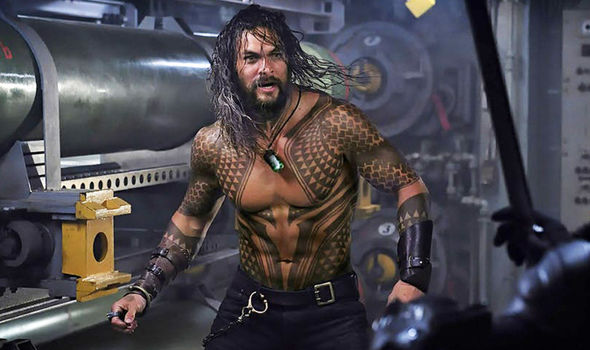 Arthur (Jason Momoa) was born of a human, Tom (Temuera Morrison) and the queen of Atlantis, Atlanna. (Nicole Kidman) She returns to Atlantis to protect her husband and son, is forced to marry another and has another son, Orm (Patrick Wilson) and then is executed for her crime of falling in love with a human. Now Orm wants to wage war against the surface world, so his betrothed, Mera (Amber Heard) goes to recruit Arthur, the rightful king for this fight.

If you would've told me last year that I'd be paying theater money to go see an Aquaman movie I probably would've laughed, but here I am, enjoying the camp that was provided to me. Aquaman has hands down some of the most ridiculous dialogue I have heard in a movie this year, but damn do they know it. And they make it work. The awesome score that plays throughout elevates it.

Aquaman is the first "fun" DCEU movie. Where others failed, they succeed in flying colors mostly thanks to its charismatic lead actor in Momoa. He took what many (myself included) called a boring character and made him into a beer loving bro, which is the best thing that could've happened to Arthur Curry on the big screen. It also manages to not completely flop in its 3rd act like even the mighty Wonder Woman did. I really liked how this film ended, it easily could've gone in another direction and it didn't.

This is a very CG heavy film, which some won't like but 90% of it is stunning. Atlantis looks beautiful, really the only shoddy CG in this is during fight scenes on land and when some of the humans ride animals but who gets those right on the first try?

I did have a few complaints, Amber Heard had zero chemistry with Momoa and made their romance feel so forced and unearned, especially when Kidman and Morrison display 100 times the chemistry in their short amount of scenes together. Mera is a cool character, but emotionally Heard did her no justice. The other issue, I think falls squarely on WB. I got the feeling that director James Wan did not feel confident in this film becoming a hit (and who could blame him) therefore, he shoves a lot of Aqua-lore into this movie, but also leaves a lot of questions. Why exactly is Aquaman essentially bullet proof and has super strength above water? They also waste their secondary villain, Black Manta (Yahya Abdul-Mateen II) A lot of this could've been saved for the sequel.

I hope DCEU eventually starts tying these movies together. We get a mention of Steppenwolf here but we don't see any other familiar faces. They should either make cameos in each movie or have a Phil Coulson-like character that ties them all together. That would be a good idea if they plan on continuing this universe.

Memorable Quote: "If only I knew you'd grow up to be such a dick." - Arthur (Jason Momoa)