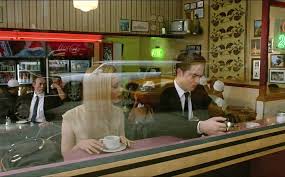 Eric Packer (Robert Pattinson) is driven through Manhattan in his swanky stretch limo. His purpose? Getting a hair cut, but what happens is anything but ordinary. Eric is a billionaire, and his company is experiencing a threat. He interacts with people throughout the day, all who seem more interesting than Packer himself.
Parts of this film went over my head. I'll admit it. I'm still not exactly sure what Packer did for a living, or why he chose to - minor spoiler alert - shoot a certain someone near the end of the film. It's not that I had a hard time paying attention to the dialogue in the film, which was great by the way. I had trouble paying attention to Pattinson himself. I felt he was extremely miscast here. He's bland and boring and unfortunately for me, was in every single scene. Throughout this guy's day, other people drop in to his limo to update him on the current situation, and they are all quite fascinating, but Pattinson is like a black hole sucking everything interesting away. His best scenes are opposite his wife, Elise (Sarah Gordon) but are few and far between.
This film had potential. You can certainly see some of Cronenberg's signature scenes throughout. I just think that he mis-stepped when casting Pattinson. I don't think he's a horrible actor, I just think he wasn't meant for this.
Recommended: No
Grade: C
Memorable Quote: "My prostate is asymmetrical" - Eric Packer (Robert Pattinson)﻿