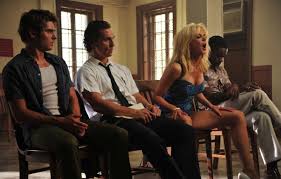 I remember watching director Lee Daniels in a documentary on IFC called "Indie Sex." He said something along the lines of "Eventually I want to make films about rainbows and happy places, but right now I want to explore some dark places." With Shadowboxer and Precious, The Paperboy certainly falls into one of those dark places.
Jack (Zac Efron) has essentially thrown his life away. He was a gifted swimmer, but got kicked out of college. He reluctantly returns to his hometown in Florida. His brother, Walt (Matthew McConaughey) and his partner Yardley (David Oyelowo) have also returned to write a story on a local convicted killer on death row, Hillary. (John Cusack) They also interview Charlotte, (Nicole Kidman) a woman who wrote to Hillary and is about to marry. She's never met him in person until now, and poor Jack starts to fall for her too. The story is narrated by Anita, (Macy Gray) who works as Jack's family's maid.
When this film first came out it got a TON of hate, and I totally see why. The editing at times is very bad and Zac Efron gives a terrible performance. I almost feel bad for hating on him so much, but this character was clearly more complicated than he's capable of handling. Whenever he was on screen, I kept thinking to myself what other actors could've actually pulled this off. (Brady Corbet, Joe Dempsie, and Jesse Eisenberg came to mind) It's hard to completely look past Jack, as he's the lead, but the rest of the movie is so outrageous I couldn't help but be fascinated by it.
Kidman and Cusack are insane here. They have two of the most disturbing sex scenes I've seen in awhile. (and one is completely done without them touching each other. A scene that I think is one of the best thanks to their over the top moaning and McConaughey and Oyelowo's facial expressions) It reminded me a lot of Killer Joe in a way. It's like I was watching something I shouldn't be, but couldn't look away. The Paperboy surprised me in many instances. I didn't expect it to go the way it did. Other than Efron, all of the leads give great performances. If you're a Cusack fan (I'm not) I would definitely check this out. His role is small, but it's pretty terrifying.
Another thing The Paperboy accomplished was capturing the feel of sticky Florida in the summer. Everyone looked so hot, sweaty, and uncomfortable. It was actually a bit of a relief for me to look out my own window and see snow. Honestly, it was the perfect setting for this film.
Grade: B-
Memorable Quote: "I'm not gonna blow a friendship over a stupid little blowjob." - Charlotte (Nicole Kidman)﻿
Indie Gems