DVD Review: This Must Be The Place 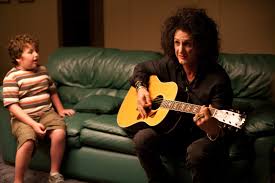 This Must be the Place is an interesting film to write about. I waited a few days after seeing it to type my words, and I'm still not sure what to make of this film.
Cheyenne (Sean Penn) is a retired rock star living in Dublin. He enjoyed his success (he's rich enough that he doesn't have to work) but he's also haunted by aspects of it. When is father passes away, Cheyenne goes to New York City, and starts a search for a man his father had been looking for. A former Nazi who humiliated him in Auschwitz.
When I first heard about this movie when it premiered at Cannes in 2011, I added it to my must see list without really knowing what it was about. I just saw Sean Penn dressed up like a member of Motley Cru and thought: "Ok, that looks interesting." This movie wasn't what I was expecting. The synopsis of the film isn't really the film's main focus. It's not about finding this SS Officer. It's about Cheyenne's journey to get to that point. While it's interesting, that's also a big part of this film's downfall. The editing is quite brilliant in a sense, but at times it felt like I was watching several different short stories and not one full film. It felt very random and scattered. I hate to say this, but watching this film felt like being stoned. You say some deep, insightful things, then you quickly switch to the next subject because you have zero attention span.
The film itself isn't bad. Sean Penn gives a great performance and I could honestly watch Cheyenne for days. He was fascinating, but the film lacked a much needed structure.
Recommended: No
Grade: C+
Memorable Quote: "I suspect that sadness is not compatible with sadness." - Cheyenne (Sean Penn)﻿