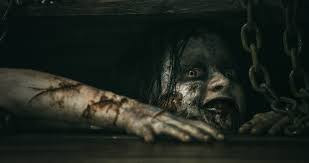 Mia (Jane Levy) is a recovering addict. In an effort to quit for good, she goes to an isolated cabin with her brother, whom she rarely sees, David (Shiloh Fernandez) and their friends Eric, Olivia and Natalie (Lou Taylor Pucci, Jessica Lucas and Elizabeth Blackmore) They find a bunch of dead animals in the cellar, and a scary looking book that is wired shut. Of course one of them reads the strange phrases in the book, and soon poor Mia becomes possessed.
It's been awhile since I've seen the original Evil Dead. I meant to watch it before hand, but never got around too it. I remember it being very campy. This one, despite the TERRIBLE acting by Fernandez and Blackmore, didn't feel campy at all. I think I can safely say this is the goriest movie I've ever seen. (an honor previously held by Martyrs) I appreciated the fact that they tried to stay away from CGI and used old school effects. Director Fede Alvarez even tried to honor Sam Raimi's style with some of the shots in the film.
The downfall of this film is definitely the acting. Pucci is the only stand out. I felt at times, even he tried to dumb down his ability to fit in with the rest of the cast. The worst actor has nearly the most screen time (aside from Mia), and that's David. I'm not familiar with Shiloh Fernandez, but after this, I don't ever want to see him try to act again. Good lord.
Evil Dead is a good horror film. It's gory, and very creepy. There aren't many "jumpy" scenes in the film, but just the make up on this characters is enough to make you squirm in your seat. If Evil Dead is hampered by anything, it's by the acting of some of the leads. Oh, P.S a dog dies in this movie. I didn't know before hand. It's not graphic, but it still made me sad.
Recommended: Yes
Grade: B-
Memorable Quote: "Everything's gonna be fine? I don't know if you noticed this, but everything's been getting worse." - Eric (Lou Taylor Pucci)
﻿