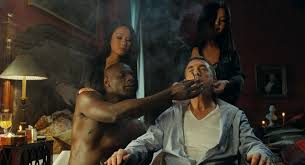 Driss (Omar Sy) is a petty criminal who is trying to get unemployement benefits. He ends up at Phillippe's (Francois Cluzet) house, where he is interviewing people to be his assistant. Phillippe is paralyzed from the neck down. He needs someone to help take care of him. Driss makes it clear that he only wants his papers signed to prove that he's at least looking for a job, but Phillippe dares him to stay. He says he won't last two weeks. Eventually, they form a very strong friendship and help each other in more ways than they could've imagined.
Going into this film, I kind of expected it to have a tone similar to The Diving Bell and the Butterfly. I thought it would be beautifully shot, but very depressing. While it's hard to see Phillippe in that scenario (I don't even think I would have the strength to continue living if I were paralyzed from the neck down) the film is actually quite light hearted. I found myself laughing more here than I did in more recent comedies. Sy and Cluzet absolutely nail their parts. They have excellent chemistry, and it's easy to see why these two men become great friends. (It's based on a true story)
Another thing I have to point out is the fabulous cinematography. There's a breathtaking scene when our main characters are paragliding, it's beautiful to watch. The Intouchables is one of the best French films I've ever seen. It's easy to see how this little film ended up grossing so much money overseas.
Grade: A
Memorable Quote: "Do you feel like starting a war?" - Driss (Omar Sy)﻿
Indie Gems