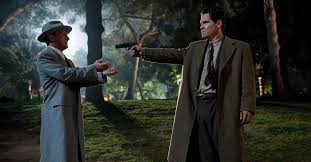 Remember when the studio forced the film makers of Gangster Squad to re-shoot their ending because it featured a shoot up in a movie theater not too long after some asshole actually shot innocent people in one? Yeah, that didn't do this film any favors.
Sergeant John O'Mara (Josh Brolin) is told to put together a band of cops (Ryan Gosling, Anthony Mackie, Michael Pena, etc.) to bring down notorious gangster Mickey Cohen. (Sean Penn) They will remain anonymous and not reveal themselves as police officers. Eventually, Mickey catches on to them.
I'm not really sure what to think of this movie. At times, the editing is really distracting. It's like they tried to do those stylish slow motion shots that directors like Zack Snyder are famous for, but failed miserably. I'm not sure if this was just my dvd, but the sound was really inconsistent as well. I found myself constantly having to turn up the volume when the characters were talking, only to turn it down a couple of notches during the many shoot out scenes. The performances were nothing special. In fact, this film actually managed to make Ryan Gosling NOT sexy. What was with that voice? I'm surprised my ears didn't bleed.

I also find it kind of funny the way the film re-wrote history. I wasn't expecting this to be a character study on Cohen, but when you put words on the screen at the end of the film to tell us what happened afterwards, shouldn't you tell us the truth? It felt a bit unnecessary. This entire film felt like a missed opportunity.

Memorable Quote: "Are you going to take me away from all of this and make a honest woman out of me? - Grace (Emma Stone)﻿