"Sookie! The only man you should be with is Eric. Then maybe Sam! What are you thinking?"
Well, I've got to hand it to the writers of True Blood. They sure know how to stir up the pot. I'll get to that in a minute.
We pick up right where we left off with possessed Lafayette drowning Sookie. Bill sensed it, and sent Warlow off to rescue her. He blasts Lala with his faery light to get Sookie's father's spirit out of him. Sookie essentially tells her dad to fuck off. He cries and leaves. That actually made me feel really bad! Bill is trying to summon Warlow, so Sookie takes him to the safe faery version of Bom Temps' graveyard. Because apparently she can go there willingly, and not just by accident now. (I'm a little slow on the fact checking, but she never did that on her own before, right?)
Bill makes that professor he kidnapped drain his blood so he goes comatose to speak with Lillith, she speaks and riddles and proves to be a little useless. Bill is going to have to take things into his own hands. He drinks Warlow's blood so he can day walk.
Same and Girl I Don't Give a Fuck About give Emma back to Martha. Alcide tells Sam that he's not allowed back in Shreveport, Bon Temps, or anywhere his pack can find him. At which point Sam should've pointed out "That's total bullshit, I OWN TWO BUSINESSES IN BON TEMPS!" But Sam just took it. What the fuck?
Andy gives his fairy daughter four names. Adalynn Braylynn Charlaine (ha!) Danica. Or something like that. Cute.
Jason is busy getting recruited into the vamp police when he TELLS SARAH NEWLIN HIS PLAN! I know Jason isn't that bright, but come on. That was stupid. She tests him later by trying to get Jessica to fuck another vampire in front of him. They don't go through with it, but something tells me we're going to see more of that vampire again.
Eric and Pam don't kill each other, thank God, they kill a few guards and piss the governor off even more. Later, Eric is in a cage, and they bring Nora in strapped to a gurney. They're giving her a poison they've created called "Hepatitis V." It's going to kill her. I really dislike Nora's character, but I loved her line "I'll be with Godric again, and I'll get to look into his beautiful blue eyes." I love Godric, more visions with him please. Eric summons Willa who is able to trick a guard into letting her see Eric. Because why have smart people guard a bunch of vampires? They break free and on their way to try to find Pam, Eric finds out that they are putting this Hep V in all of the Tru Blood they're making. "Fuck me." Eric says. 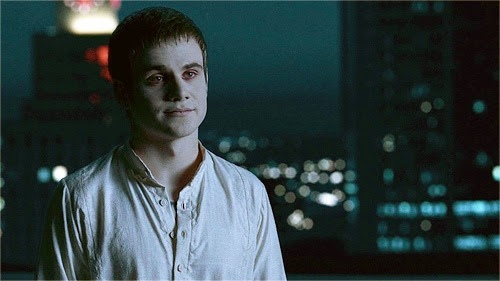 I miss Godric
I should start by saying I'm not the biggest fan of Bill, but I totally loved him in this scene: He shows up, in broad daylight to speak with the Governor. When he doesn't get the answers he wants, he has all of the guards kill each other than rips the Governor's fucking head off. He was on a Tywin Lannister level of bossery here. Loved that scene, even though he probably should've made the Governor lead him to his vamp camp.
I know I've been recapping a little out of order, but that's because there's two storylines that really bothered me this episode. Sookie's and Terry's.
Will start with Terry. Earlier in the episode, he shows up to Lafayette's to drop off a safety deposit key. Lafayette knows something is off, so he calls Arlene. Convinced that he's trying to commit suicide, Holly and Arlene decide to have a vampire glamour Terry into forgetting his past. Which is all very well, but remember last episode when Terry asked that dude to kill him? When Arlene sat down on Terry's lap, I was on the edge of my seat. I thought a bullet was going to come through that window and hit Arlene instead. Later at Merlotte's Terry gets shot in the neck and dies. He dies with Arlene singing to him.
I like Terry, I do. He was sweet, and even though I hate the ifrit storyline SO MUCH, I felt like his death was an after thought in this episode. I'm sure Terry's death will be the catalyst to bring everyone together, back to Bon Temps, but I felt like he deserved better. I'm not saying he should've been the main focal point of this episode, but the fact that he got shot at work, and no one even yelled "call 911" or made a half ass attempt to save him was total bullshit.
Speaking of total bullshit, let's get to Sookie and Warlow. In faery land, Sookie had to bind Warlow's hands because despite being with him at night time before, he can't control himself. (sure) They talk a little about how much Warlow has longed for Sookie, then for some reason, Sookie decides to let him feed on her, then fuck her. Yes, the same Sookie that rescinded Eric's invitation to her house because she wanted to be "that girl in the white dress again" lets a vampire feed on her, then creates a blood bond with him. THEN FUCKS HIM! What!? Where did that come from? Anna Paquin just had twins, and she looks like that good!? Can someone just kill Warlow? The only dude Sookie should be fucking is Eric.
Despite that, this was actually one hell of an episode, and it sets the stage for something big. I can't wait for next week's episode.
The Newsroom
So this is the start of season 2's big story: The Genoa tip. (The first "fake" news story that Aaron Sorkin has introduced as a main plot point.
What we learned:
1) Genoa is going to be a big fucking deal.
2) Don is heart broken over a man put to death for a crime he didn't commit (and Thomas Sadoski really killed it with his pain. I'm assuming he's going to need those skills again when Maggie is in Africa)
3) Everyone on the Romney bus is a total douche bag, and Jim is getting real tired of Maggie's shit.
4) So is Lisa.
5) Will's first broadcast was on 9/11 and it was very emotional. Also he used to be a prosecutor, and he bailed Neal out of jail by throwing a well worded bitch fit.
6) MacKenzie gives Maggie permission to go to Africa. Uh oh.
7) Foursquare is super creepy.
8) Sloan had the best lines in this episode and no you can not fucking say Charlotte.
9) Sloan and Don are going to bone.
﻿
﻿
Rambling TV