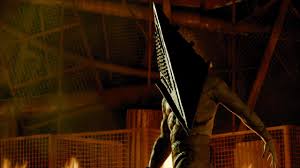 I'm not really sure how they talked Sean Bean and Radha Mitchell into reprising their roles. Or how they managed to get someone like Carrie-Anne Moss. This film was littered with problems and you probably already know how this review is going to go.
Harry (Sean Bean) and his daughter Heather (Adelaide Clemens) have just moved to another town. They've done this quite often, trying to escape their past. She makes one new friend at her high school, Vincent (Kit Harington) who seems to somewhat understand her. She's been plagued by visions of a place called Silent Hill since her childhood. When her father is suddenly taken, she's forced to go there to save him.
Let's be real here. There is no fucking way Clemens or Harington are in high school. They're both in their mid twenties and they look it. Putting them in a high school setting was just embarrassing. The thing that made the original Silent Hill so damn creepy was the aspects from the games. (which were pretty damn creepy as well) but the effects they used for 3D actually cheapen the look. Even Pyramid Head isn't as menacing as he once seemed. As much as I loved seeing Sean Bean and Kit Harington on screen again, and waited for a "The next time we see each other, we'll talk about your mother." or a "you must be Ned Stark's bastard!" this movie was awful. I feel bad for mostly everyone involved.
The ending you can see a mile away, and I only hope that Vincent showed Heather the lord's kiss to make everything better.*
Recommended: No
Grade: D-
Memorable Quote: "My mother... She's kind of intimidating, my mother." Vincent (Kit Harington)
*Did anyone here really think I could go through this review without making Game of Thrones jokes?﻿