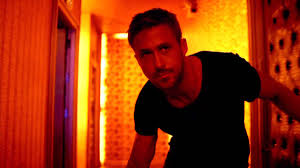 Julian (Ryan Gosling) is a drug dealer hiding behind the guise of a boxing club. His older brother is murdered. Julian knows why, and lets the man who did it go. Well Julian's peach of a mother (Kristin Scott Thomas) shows up, creeps on her son and demands she give him her older son's murderer's head.
This film is littered with long takes and stunning lighting. As a film fan, I can appreciate that..to a point. Cinematography one of the most important parts of film. It helps enhance the story and makes us feel like we're really there. But here's the thing, when you are being to obvious about it, you're not enhancing it, you're being pretentious. I know some will interpret that differently, but here's my stance on it: When you wade into some Lars Von Trier douche territory and start filming certain things "just because they look arty." It's overkill. Gus Van Sant perfected the "long take" because his characters are actually accomplishing something while he's doing it. Sam Mendes can shoot a fight scene against a beautiful Shanghai back drop, and it works because the it enhances the scene, not overwhelms it.  Ang Lee can give us sweeping views of the mountains in Brokeback Mountain, and it means something because that is where his characters fell in love.
Refn shoots long takes of his actors just standing there, staring at each other. Then will pan back and forth between the two again. It gets long and unnecessary. The film drags because of this. I liked the darkly lit hallways he used. I liked him shooting a scene through beaded curtains, but they go on for several minutes too long. How long do I need to see Ryan Gosling and a prostitute starting at each other? About 5 seconds. Not 5 minutes. Would the film have been better if he would've laid off this technique? Yes, but not by much. The plot itself is thin and we don't get enough back story as to why Julian does what he does. How can I feel for him if the only thing I know is that he fucked up in America, fled, and has a terrible mother? I've read a lot of complaints that the film is "ultraviolent" but I have to disagree here. It was violent, yes, but not more than I expected it to be.
I hope Nicolas Winding Refn isn't the next M. Night. I really hope this isn't the case of Refn having one hit (Drive) then subsequently getting full control of a movie and ruining it. (Like M. Night has done on everything after the Sixth Sense) But to be perfectly honest, Cliff Martinez's excellent score is the only reason I'm not giving this movie a big fat F.
Recommended: No
Grade: D-
Memorable Quote: "Wanna fight?" - Julian (Ryan Gosling)
﻿
﻿